Between January and April 2020, Russia imported 108.8 bln RUB worth of ready-made pharmaceutical drugs (customs clearance and VAT included), which is in monetary terms (rubles) 39% lower than in 2019. The in-bulk import amounted to 44.1 bln RUB, with the dynamics of +9%.

Despite the negative dynamics of the import of ready-made drugs, the situation is on its way to stabilization and usual seasonal trends. (Since the market expected a labeling system, those trends have been distorted.) The dynamics in monetary terms in April 2020 are +8%, -38% in March, -60% in February, and a record-worthy - 63% in January.

Three top 15 importers of ready-made drugs showed multiple growth rates. SG Biotech has the highest dynamics in monetary terms (imports grown by 3.7 times), the company’s Advate and Feiba contributes to the dynamics. SG Biotech is followed by Biogen Idec (imports grown by 3.4). The import of Spinraza, drug for the treatment of spinal muscular atrophy, which was not imported to Russia a year earlier, made the dynamics. Biomarin Pharmaceutical, which did not import to Russia between January and April 2019, has also tripled its imports. Its Naglazim accounted for a bigger part of the import, while Vimizim contributed to the dynamics the most.

As for in-bulk drugs, Astellas, followed by Eisai, has the highest dynamics among the top 15 companies (imports grown by 4.7 in monetary terms). Flemoxin Solutab and Ribomustine contributed to the company’s dynamics. Both drugs were not in-bulk imported to Russia last year, but now secondary packaging resumed at Ortat in the Kostroma region. Eisai has increased its imports by 3.2 times. Between January and April 2020, the company imported anti-tumor Lenvima and Halaven, packaged by Pharmstandard in Ufa. 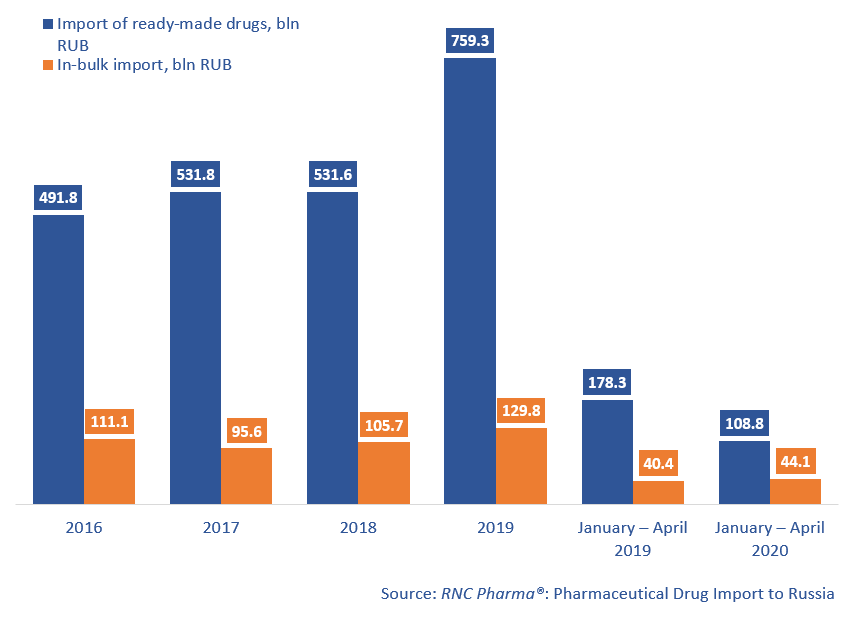