Survey by RNC Pharma and Doktor Na Rabote (Doctor at Work): 43% Believe Fundamental Changes Only Possible after Decision-Making and Responsibility System Is Revised


Despite a flurry of criticism of the activities of the former members of the Ministry of Health, only 5% of doctors believe that the new Government of the Russian Federation will make fundamental changes to the key issues of the organization of the health system, according to an online survey by the RNC Pharma analyst company and the Doktor Na Rabote (Doctor at Work) social media service for doctors.

Most respondents (43%) are sure that not only personnel changes, but also a revision of the decision-making and responsibility system is necessary to change the current situation.

22% of the doctors said that “no fundamental changes will follow.” Another 16% of the respondents believe that the new cabinet will make “minimal changes to solve the most acute and obvious problems, but nothing will change fundamentally.”

6% of the respondents who provided their own variant were as pessimistic, complaining about the isolation of the “healthcare optimization” process from practical medicine. They spoke about how meaningless the continuing medical education system in its current form is, and expressed concern that the change in health system leaders will only lead to a change in the reporting system and increased “paper work.”

What changes in the health care system do you expect after the resignation of the Government of the Russian Federation and the appointment of a new head of the Ministry of Health? (single answer question) 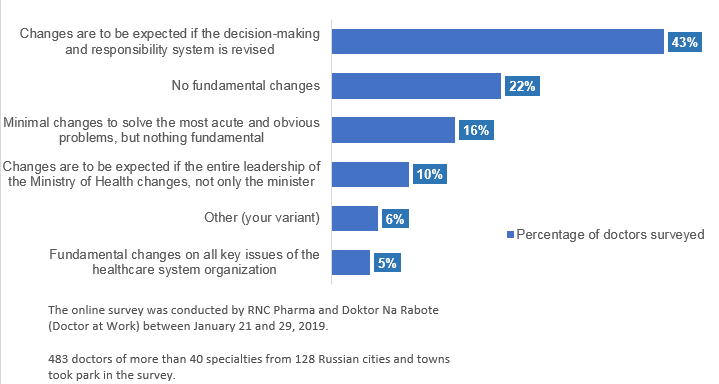