Katren acquiring a controlling stake in the Erkapharm chain is set to be the highlight event of 2021 for the Russian pharmaceutical retail. This deal is of interest first and foremost not because it is a big one and the first of its kind, but because it has launched active consolidation processes in the industry, and other wholesale companies can hardly stay away from these trends. The market leaders have preferred to let their retail divisions develop naturally until now, but now the situation may change, and we may witness other major deals. Moreover, Katren’s interests in the pharmaceutical retail go far beyond Erkapharm and Melodiya Zdorovya. Their main asset is, of course, Apteka.ru, which has added nearly 3,000 new pharmacies in the first six months of 2021, now uniting almost 30% of Russian pharmacies. Many might be wondering how this potential will be used.

The explosive growth of various pharmacy associations is another fundamental trend. In addition to Apteka.ru, ASNA, ProApteka and some others have concluded multiple partnership agreements. This is obviously the result of independent retail pharmacies and relatively small regional chains experiencing difficulties now. While the abolition of tax incentives have only spurred this process, the problems in retail are not limited to it. The demand is growing rather slowly, and a relatively small number of drugs are used to battle COVID-19. There is also growing pressure from distributors, rapidly developing online players, etc. In such circumstances, an attempt to join one or another bigger project or projects is seen as a way out for many, even at the cost of becoming less independent.

More prominent conventional retailers do not seem to be ready for this, especially since there is a unique opportunity to widely expand their own chains due to certain participants withdrawing from the market. Some players are trying to do this by concluding partnership agreements with the representatives of the so-called “big retail”, for example, Aloe started to cooperate with Lenta. This approach can hardly be called new: many have tried it, but none have been successful so far. The partnership between Megapharm and X5 is known to have yielded no results, and Magnit’s own pharmacy chain has been shrinking for the third quarter in a row, losing 438 pharmacies. 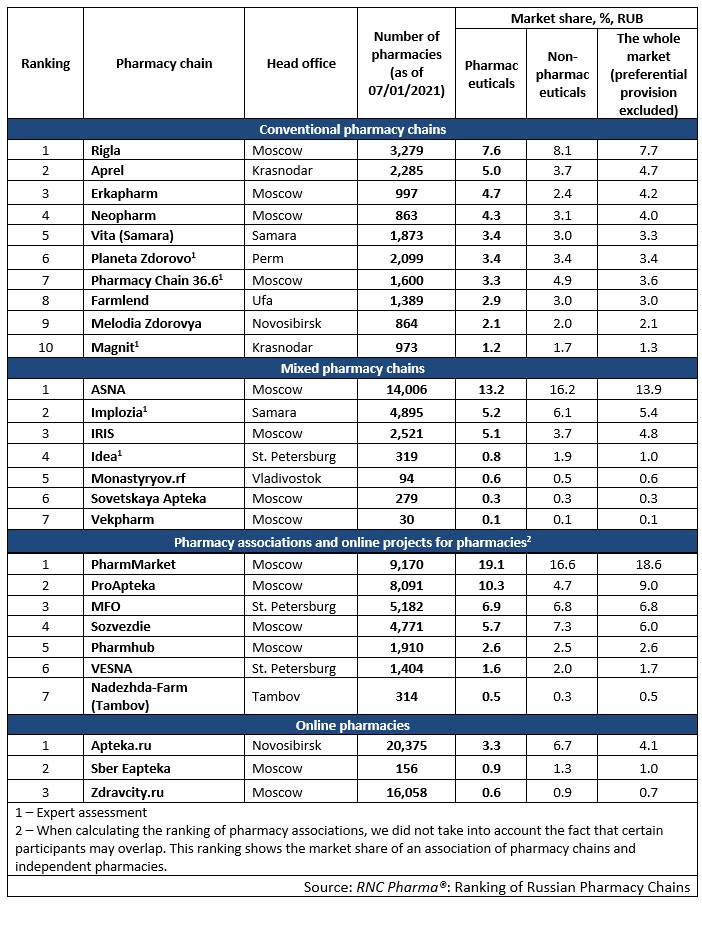