Survey by RNC Pharma and Medvestnik: 50% of Russian Health Workers Do not Want to Get Vaccinated due to Lack of Research


Out of 1,119 health workers (doctors, nurses, laboratory assistants, etc.) who took part in the survey conducted by the RNC Pharma analyst company and the platform for doctors Medvestnik, only 11%, or 129 people, refuse to get vaccinated. Only 7% of those has objective reasons, i.e. medical contraindications, another 20% had a high antibody titer after a previous infection, which might allow them to postpone vaccination, but not to avoid it forever.

The other reasons are more subjective. For example, the most popular answer chosen by 51% of the responders was: “The vaccine has not been studied enough.” 8% of the study participants stated a similar reason, but more categorically: “It is an experimental vaccine, and I do not want to be a guinea pig.” However, the study results of Sputnik V have been repeatedly published, in credible foreign publications among others.

Personal experience played an important role as well. 7% of the health workers noted that they had patients who had been infected after vaccination. Finally, around 5% of the respondents refuse to get vaccinated because of the contradictory official information and the lack of objective complications statistics, which demonstrates the notorious distrust of health officials.

The “Other” category included a significant number of answers, for example, “High-pressure advertising”, “Compulsory nature of vaccination”, and “The need for revaccination every six months.” Someone even spoke about “microchips being implanted with the shot”, but, to be fair, it was only one specialist, and they must have been joking.

Fig. Why do you not want to get the COVID-19 vaccine? (for those who answered “I do not plan to get vaccinated”; base = 129)? (multiple-answer question) 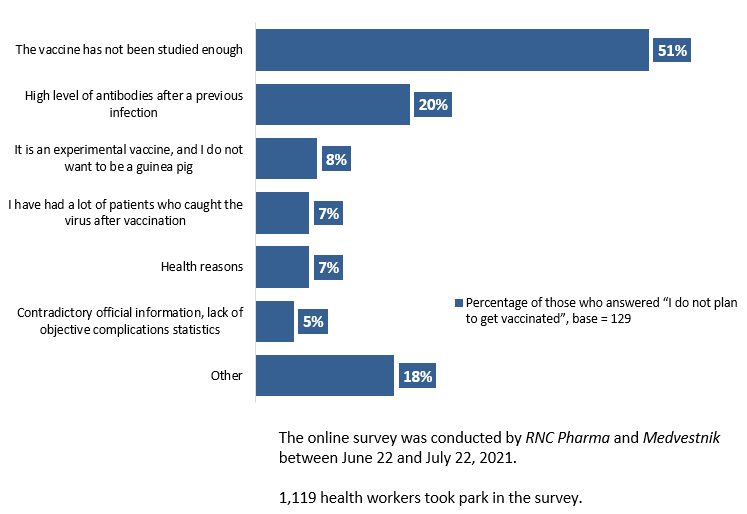