Between January and February 2020, Russia imported 22.6 bln RUB worth of APIs (customs clearance prices, VAT included), which is in monetary terms (rubles) 18.5% higher than that of the same period in 2019. The dynamics in physical terms are +31%, with 2.2 thousand tons of APIs.

The dynamics would not be surprising if it had not been for the unusually high activity of the importers in January. The import volume was not just large, it exceeded that of December in both monetary (+2.5%) and physical terms (+7.8%). The dynamics in January are usually between -20 and -30%. Apparently, it was clear to the Russian importers that the epidemiological situation in China could lead to supply disruptions and sought to have their warehouses restocked.

Switzerland became the new leader in the import volume in monetary terms, with the imports grown by 2.1 times. Novartis contributed to the dynamics the most, having increased their import of Vildagliptin by 3 times in both monetary and physical terms. Among the top 15 manufacturing companies, FIS-Fabbrica (Italy) has the highest dynamics, having increased their imports by 160 times in monetary terms. Russia also imported APIs for the manufacture of hypoglycemics, in particular Sitagliptin, imported by Berlin-Chemie and MSD for localized production of the corresponding drugs. Pfizer has the lowest dynamics in the top 15, the import of antigens for the manufacture of pneumococcal vaccines dropped by 49% in monetary and 22% in physical terms. This is also one of the few cases when the selling price of an API has noticeably decreased over the year (-34%). 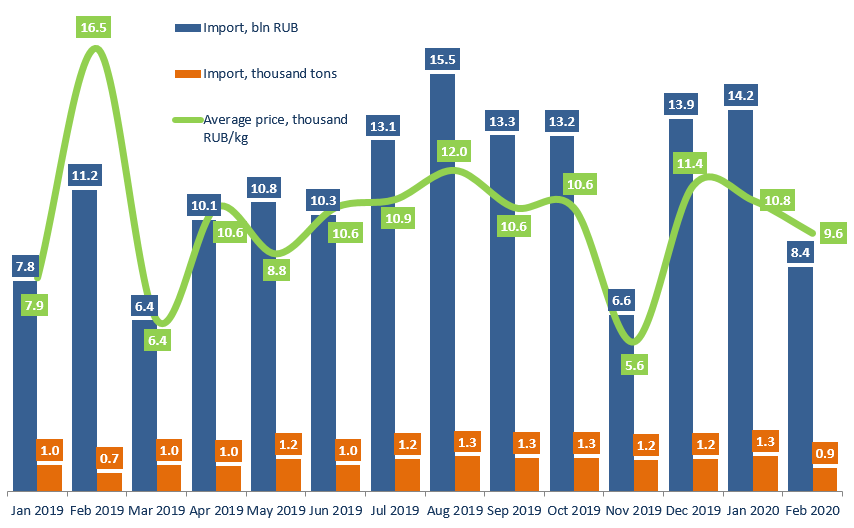