Despite the negative dynamics in physical terms, the import line has grown significantly. Between January and March 2019, Russia imported 392 INNs (against 378 in 2018), including 5 INNs that had not been imported until 2019. Among the newcomers, Gadopentetic Acid, which is imported by Russian Drugs Technology from South Korea for production of MRI contrast agent Gadopentetic Acid-TL, accounts for a big import volume, as well as Nicorandil, which is imported by PIK Farma as a commercial API from China for production of anti-angina medicine Cordinik.

Servier and KRKA are the absolute leaders in import volumes in monetary terms with 2.4 and 2.3 bln RUB, respectively (customs clearance prices, VAT included), but the difference in 100 mln RUB seems insignificant. While the import by Servier has dropped by 21% (in rubles), the import by KRKA has risen by 13%.

Dishman Group (India) has set an absolute record in dynamics in physical terms for the period with a 343 times increase. Its Bedaquilini Fumarate (around 346 mln RUB) was imported by Russian Pharmstandard for production of antituberculosis drug Sirturo. Novartis has increased their API import by 16 times; it imports APIs to Novartis-Neva in St. Petersburg. Its Vildagliptin (for production of Galvus and Galvus Met) accounted for most of the import; in total, the company imported 3 APIs over the period. 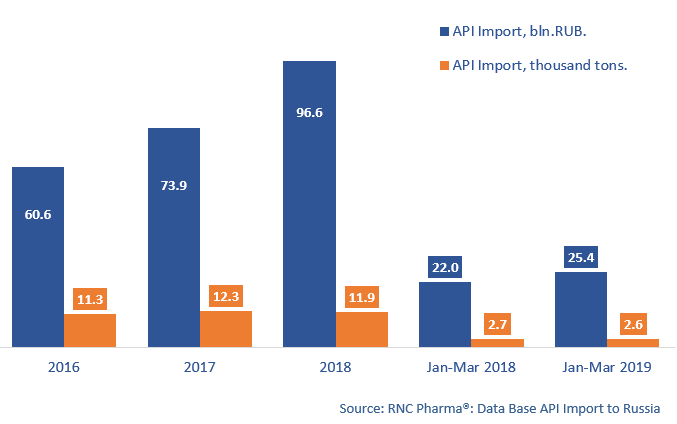