Pharmaceutical Drug Production in Russia (May 2022)

In May 2022, the production volume was 52.1 billion rubles, up 34% from May 2021. In physical terms, the growth rate was also positive—up 16% in packages and 9% in MDUs. Notably, the growth rates in May were just a little lower than those in March, which were a direct result of rush demand. However, the production, as expected, fell 23.9% in monetary and 9.7% in physical terms from April 2022, since the so-called “low season” usually starts in May, and there were no other reasons for stimulating demand, fortunately.

Usolpharm had the highest growth rates among the top 20 manufacturers of OTC drugs with the largest production volumes in physical terms; the company’s manufacture grew 19.3 times against January–May 2021. Vifiteh was another top company that saw a noticeable growth of 4.8 times. Outside the top 20, Pharmaclon and Genel RD had high growth rates of 9.3 and 5.2 times, respectively. Pharmaclon produced only one OTC drug, interferon alfa-2b for intranasal use Alfaron. Genel’s product range is wider, and the company manufactured 10 common brand names in January–May 2022, with Menovasin and Glycerin contributing to the growth rates the most.

Among the top manufacturers of prescription drugs, ProMed and Pharmstandard once again had the best growth rates, 45% and 44%, respectively. Ruzpharma (manufacture grew 6.9 times) and Besins Healthcare (5.7 times) had the highest growth rates among the “outsiders.” Both companies produced only one Rx drug; Ruzpharma manufactured the injectable form of Ceftriaxone, and Besins Healthcare produced Utrogestan. While the first batches of Utrogestan were produced at the company’s plant in Yaroslavl back in late 2020, the company reached large volumes as late as April 2021. This is the only product of the company, the manufacture of which has been localized so far.

Pharmaceutical drug production in Russia, including production of pharmaceuticals of foreign companies on owned or contract plants, in physical (packages) and monetary terms (RUB, VAT included) (January 2021–May 2022) 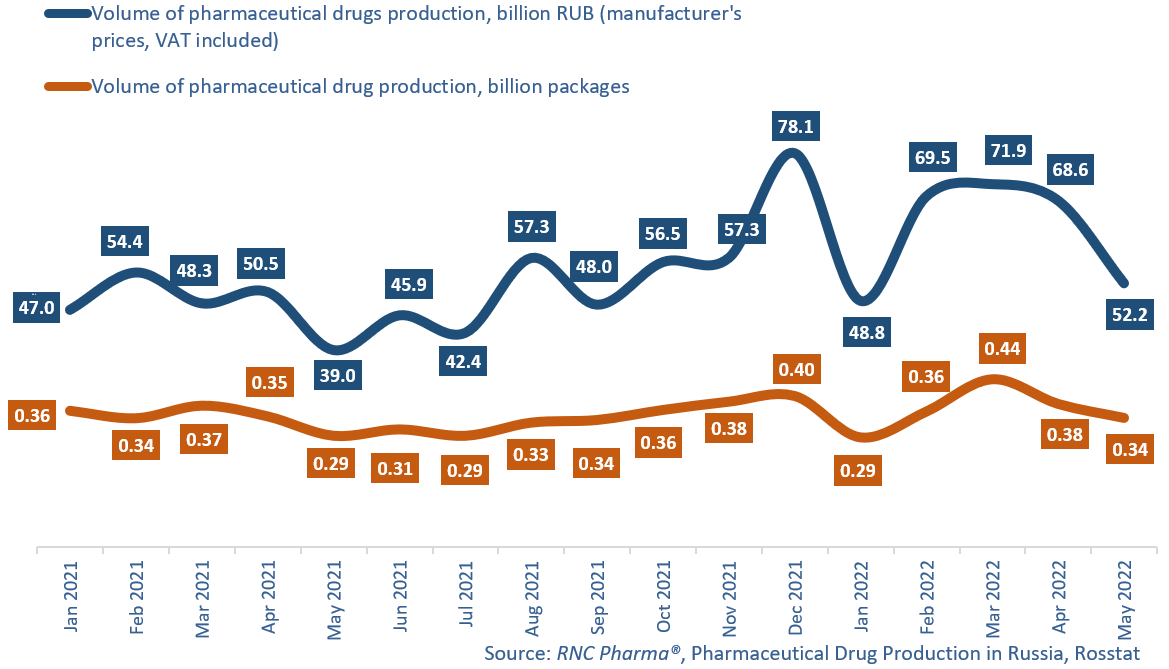