Only 8% of Russian doctors say that the healthcare facilities they work in provide all the necessary personal protective equipment, according to an online survey by the RNC Pharma analyst company and the Doktor Na Rabote (Doctor at Work) social media service for doctors. Another 17% say that there have been some interruptions in the provision, but the situation is not critical in general.

However, most of the respondents consider the problem with interruptions in the provision of PPE to be critical, and 39% noted that the staff of healthcare facilities even have to buy protective equipment or make them themselves. Another 32% say that there are not enough PPE for everyone, hence the staff using it for more time than allowed. One of the doctors described the situation as follows: “There is nothing but constant letters of recommendation. They provided use with masks for one week, and we had to use one mask per day. Now we make them ourselves. Others have only seen PPE in pictures.”

The situation in healthcare facilities in Moscow and St. Petersburg is naturally better than in the country overall, but even in the metropolitan regions, 64% of the respondents report serious problems with the PPE provision. 30% of them have to find PPE themselves. At the same time, the proportion of those who in the current situation do not see any difficulties with the PPE provision at all does not exceed 11%.

Is there enough personal protective equipment (PPE) (masks, respirators, goggles, etc.) in the healthcare facility you work in? (single-answer question) 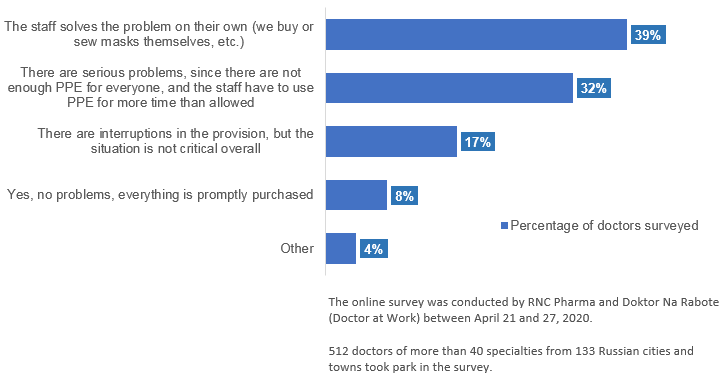