From January to March 2022, Russia imported 200.6 billion rubles’ worth of ready-made drugs (customs clearance and VAT included), up 11.5% from the same period in 2021 in monetary terms (rubles). The import of bulk drugs rose by 17.4% in rubles. In physical terms, the import of ready-made drugs was the same as one year earlier, 429.4 million packages. As for bulk drugs, the import volume was 414.5 million minimum dosage units (MDU), down 29.3% from last year.

Notable, the import volume of ready-made pharmaceuticals in March 2022 not only did not decrease, but also showed an upward trend, despite the logistical difficulties that arose due to the military operation in Ukraine. The growth rate was 24% in rubles and 1.5% in packages. The import of bulk drugs, however, fell by 18.6% in monetary and by 12.4% in physical terms. That came after two months of rather high growth rates, since in February 2022, for example, the growth rate was 84.5%.

The transport corridors now have to be organized differently, though. In particular, the imports of ready-made drugs to Russia in March 2022 from Belgium, Serbia, Switzerland, and Spain significantly decreased. The volumes went down not only against March 2021, but also against February 2022.

At the same time, Russia saw a significant increase in imports from Lithuania, Finland, Turkey, and the UK, with the imports increasing multiple times in physical terms. For example, the import of ready-made drugs from Lithuania to Russia increased 7 times in March 2022 (in packages) against March 2021 and 3.2 times against February 2022. Among the top 20 manufacturers of ready-made pharmaceuticals in March 2022, Ipsen is worth mentioning—its imports grew 5 times in rubles against March 2021, with Cabometix and Somatuline Autogel contributing to the growth rates. Biogen also saw a significant increase (imports went up 2.1 times), thanks to the import of its Spinraza. Even Eli Lilly, the only company that announced it would suspend the import of drugs outside the VED list, showed an increase of 38%, with Cialis, which was planned to stop importing, growing by 78%.

As for the top importers of bulk drugs, Johnson and Johnson and Astellas had the best growth rates (their imports grew 2.5 and 2.4 times in rubles, respectively). The import of Johnson and Johnson’s antitumor drug Imbruvica, packaged at a Pharmstandard facility in Ufa, contributed to the company’s growth rates the most. Astellas increased the imports of antibiotic Flemoxin Solutab and antimycotic Micafungin, both packaged at an R-Pharm facility in Kostroma Oblast. 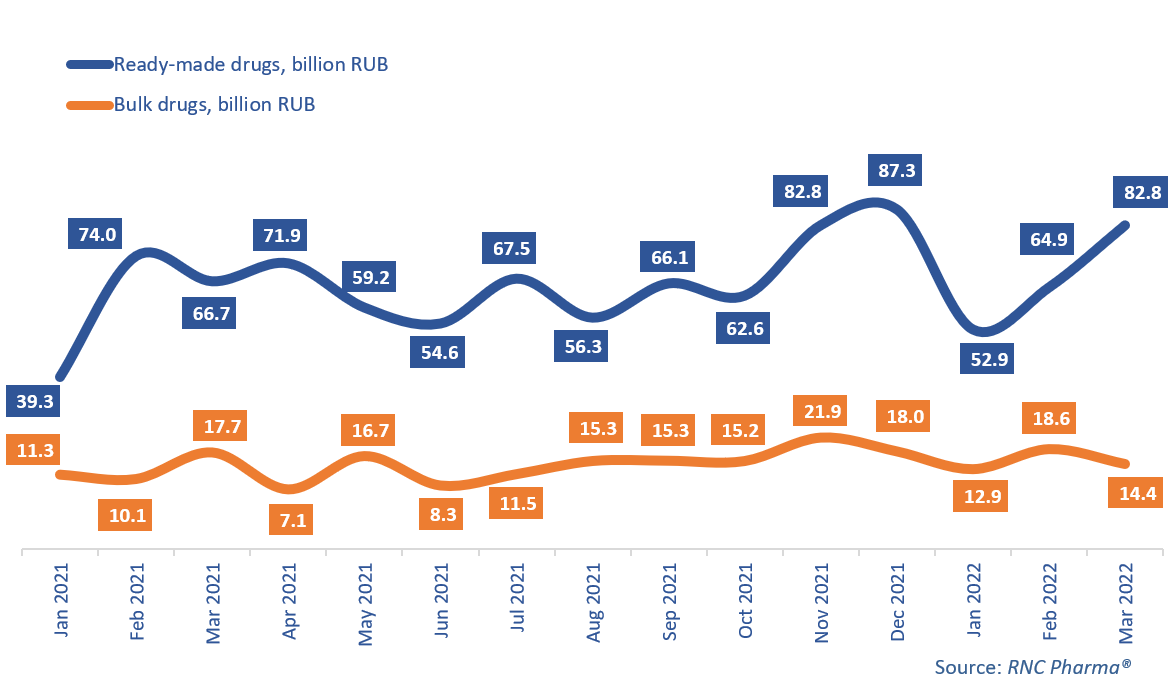