Serious changes had begun on the market even before Katren completed its purchase of a controlling stake in the Erkapharm group. First, the structure of Erkapharm’s suppliers began to change—obviously, in favor of the new owner. But most importantly, the company seems to be preparing for a long overdue global reform of its retail. A number of Erkafarm pharmacies have been rebranded into Apteka.ru, and the process can continue if proven effective.

At the same time, Apteka.ru itself unites 20,375 pharmacies as of July 1, 2021. In just 6 months, the company managed to add 3,000 pharmacies, which had previously seemed possible after a couple years of hard work at best. In total, the company owns almost 30% of the entire infrastructure of the Russian pharmaceutical retail market, and it would have been strange not to use this to form a new strategy for the development of the wholesale business.

Russian Post also continues to implement its investment strategy, receiving a license for the wholesale trade, storage and transportation of medicinal products in June 2021. It does not seem likely that this will attract any of the serious retailers, though. You can probably afford an experimental strategy if it is not with your own money, although the wholesale market participants hardly see Russian Post as a serious competitor.

The second half of this year for retail-oriented wholesalers will hardly be better than in 2020, since a new wave of COVID-19 is expected in September-October 2021. It is almost inevitable with less than 25% of the population vaccinated, which means a surge in drug consumption. However, all this is relevant in the short term. In addition, by the end of 2021, the top 3 pharmaceutical distributors in the direct supply market is sure to have changed. The more intense global competition following the actions of Katren or some other players will require strategic decisions, for example new transactions, including those outside the conventional pharmaceutical retail. Pharmacy associations, as well as representatives of the online market, can also be of interest to large wholesalers. 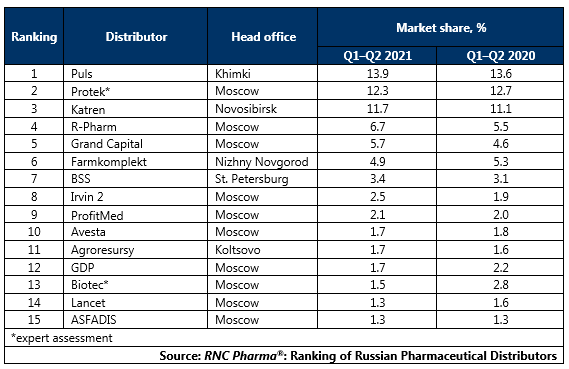