Between January and February 2018, Russia imported 70.4 bln RUB worth of ready-made pharmaceutical drugs and 14.1 bln RUB worth of in-bulk drugs (free circulation prices), which is in monetary terms 10.2% higher and 3.1% lower than that of the same period of 2017, respectively. In total, the dynamics for the period are 7.7%.

In physical terms, Russia imported 148.2 mln units of ready-made drugs, which is 0.7% lower than that of February 2017 or 3.3% higher if calculated in MDU (minimum dosage units). However, together with January performance, the dynamics are -0.3%. The dynamics of the in-bulk import are 14.8% if calculated in MDU.

Roche and Bayer Healthcare are among the leaders in the import of ready-made drugs in February 2018. Roche has increased its import by nearly 5 times over the year, in particular due to the fact that in February 2018 they started to import the pharmaceutical drugs that had last been imported in February 2017. These are Herceptin, Kadcyla, and Mircera, among others. Roche resumed the import of ready-made Herceptin after a 6-year hiatus, importing only in-bulk Herceptin over the period. In February, Roche also started to import Ocrevus, which was registered back in October 2017. Bayer increased its import by 2.5 times in February, which was due to the new import schedule of certain pharmaceutical drugs.

Dynamics of import of pharmaceuticals, including homeopathic and seawater drugs, to Russia, free circulation prices including customs clearance and VAT, RUB (January 2017 – February 2018) 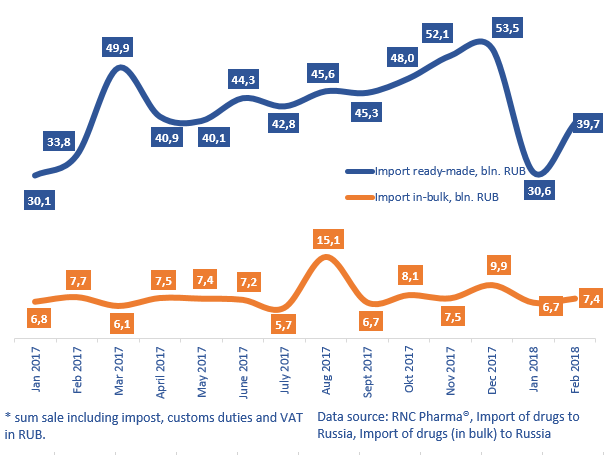