Participants in foreign economic activity in May 2022 were mainly responsible for these outstanding results. The logistical problems that the Russian market faced in the early stages of the crisis were resolved, with deliveries falling into a more or less regular pattern, adjusted to the new logistics. The growth rate in May 2022 was 8% in tons and 49% in rubles. While not record-worthy compared to February, the results clearly showed that the acute phase of the crisis had passed.

The number of importing countries almost returned to what it used to be. In January–May 2022, Russia imported APIs from 30 countries—while only 2 less than in January–May 2021, the role of certain region changed dramatically over the year. For example, imports through Lithuania increased 23.6 times against January–May 2021, with omeprazole, supplied in transit from India, accounting for the largest volume. The Czech Republic increased its imports 5.9 times, mainly because of dextrose and sorbitol produced in France. Austria showed another outstanding result (imports grew 4.5 times), importing deproteinized hemoderivative of calf blood. Notably, the product was manufactured in Austria. Poland and India saw the biggest drop in imports (–80% and –63%, respectively). In particular, the volume of direct imports from India significantly decreased, and while the manufacturers are trying to work through third countries, including Germany, Lithuania, the Netherlands, etc., the pre-crisis results are still unattainable.

Osimertinib (imports grew 3.5 times in rubles), dapagliflozin (2.4 times) and bisoprolol (2.2 times) had the best growth rates among the top 20 INNs with the largest import volumes in monetary terms in January–May 2022. The first two APIs were imported in the interests of the Russian division of AstraZeneca, localized in Kaluga Oblast. Bisoprolol was imported by eight Russian companies at once, with Merck accounting for the largest volume and best growth rates. Merck is involved in localizing the production of Concor at the facilities of Nanolek in Kirov Oblast.

In physical terms, lactulose had the highest growth rates (33.4 times in tons), since the production of Duphalac was localized at the facilities of Veropharm. Lactulose is followed by diosmin (imports increased 7 times), which was mainly imported by Binnopharm Group. Piracetam places third (2.9 times), with Ozon accounting for the main volume. 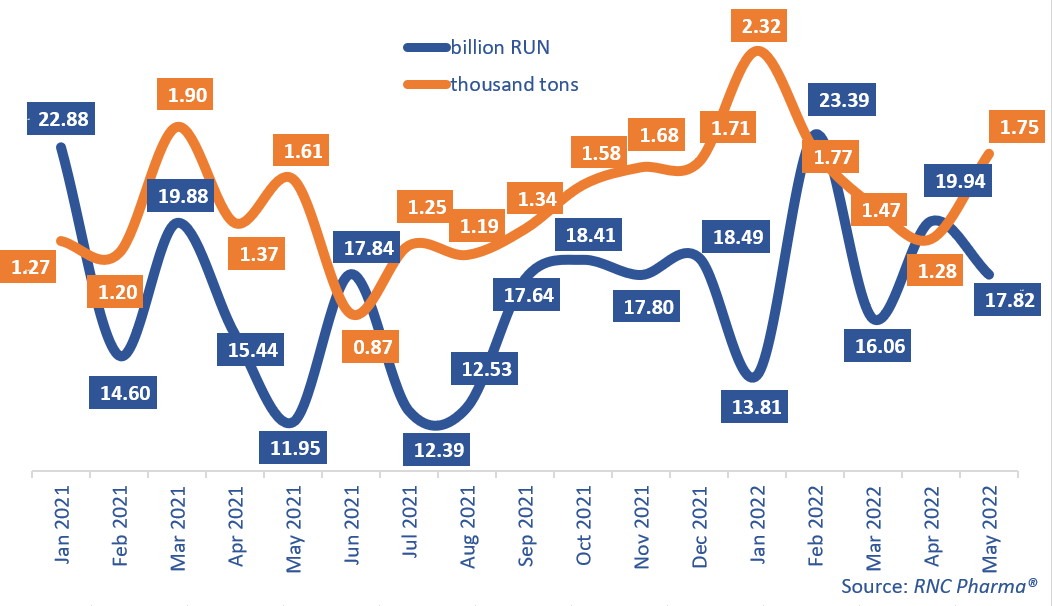