April was a failure, as expected. First, there was no point in importing large amounts just after the rush demand in March and a noticeable surge in foreign economic activity, and second, it was a direct consequence of the current logistics problems. The growth rates of the import of ready-made drugs in April 2022 were –14% in monetary and –30% in physical terms. As for bulk products, the growth rates were 24.6% in rubles and –40% in MDUs. However, what seemed to matter in the case of bulk drugs was the fact that the import of cheap drugs has been falling while that of expensive drugs has been going up.

The total number of countries, including transit countries, that imported ready-made pharmaceutical drugs to Russia in April 2022 remained practically the same, while the logistics continued to change. As a result, Germany, India, Sweden, Hungary, Poland, etc. significantly reduced their import of ready-made drugs to Russia. At the same time, the import from the following countries grew: the Netherlands and Macedonia (import increased 3.3 times against April 2021), Bosnia and Herzegovina (2.4 times), and Slovenia (up 31%). Slovenia can also be considered one of the top importing countries, accounting for 9% of the total import of ready-made drugs to Russia in January–April 2022.

Merck had the best growth rates among the top 20 importers of ready-made pharmaceuticals in January–April 2022. The company increased their import 2.3 times against January–April 2021, with its antitumor Erbitux and immunosuppressant Mavenclad contributing to the growth rates the most. MSD doubled its import, while importing mostly Lagevrio, drug for the treatment of COVID-19, even though there is a Russian alternative by Promomed and at least two more Russian-made alternatives are expected to appear on the market in the coming months.

As for top bulk importers, Biogen had the highest growth rates—the company’s import grew 4.7 times against January–April 2021. Biogen imported Tysabri, a drug for multiple sclerosis, packaged by Pharmstandard in Ufa. MSD increased their import 2.3 times against January–April 2021, with its anticancer drug Keytruda, packaged by Ortat (R-Pharm group), contributing to the growth rates the most. Antiviral Epclusa, packaged by Pharmstandard in Kursk, helped the growth rates of Gilead (import grew 2.2 times). 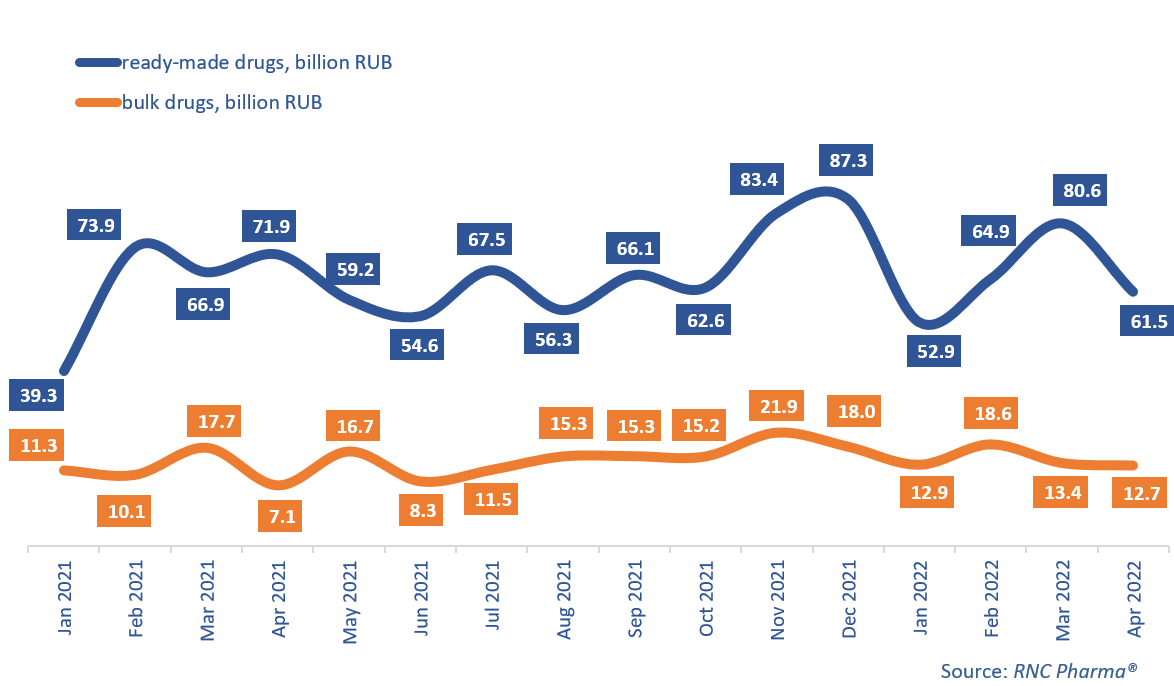