It was the consumption and production activity in March 2022 that made the results of Q1 2022 impressive enough—the growth rate in March was 32.4% in monetary terms. The March results were not that record-worthy, however, since the growth rate back in March 2020 was 33.2% and 45.3%in April 2021. Still, these two results can be easily explained; March 2020 turned out abnormally warm in most of central Russia, prompting the seasonal surge in sales a month earlier than usual, while in April 2021, the demand returned to its usual seasonal indicators. This year saw some weather anomalies as wekk, but they seemed to have delayed the start of the so-called “high season”, while high demand could be explained by the fears that arose after the start of the special military operation in Ukraine. Consumers became worried about a possible increase in prices due to the devaluation of the Russian ruble, as well as a number of foreign companies leaving the market, resulting in rush demand in most consumer markets, with the veterinary direction being no exception.

Consumers seemed to have stocked up on foreign-made veterinary drugs first. As a result, the share of Russian companies in the market plummeted both in monetary and physical terms in Q1 2022. Their share has been going down for a few years, except that now the fall is much more significant. In January–March 2022, Russian-made veterinary drugs accounted for 36.1% of the market in monetary terms against 41.3% in Q1 2021 and 43.1% in Q1 2019. In physical terms, the share was 62.7% in Q1 2022 against 65.4% one year earlier.

Italian ISF Industria Chimica had the best growth rates in monetary terms in Q1 2022 among the top 20 foreign manufacturers. The company sold only product, antibiotic Tsefalen for dogs; its sales doubled against Q1 2021. Czech Contipro showed impressive growth rates as well, with its Bonharen (+90%), a drug for the treatment of arthrosis, arthritis and other joint diseases in horses, dogs and cats. As for Russian companies, Silma and Agrobioprom had good growth rates, 20% and 17%, respectively. Silma sells only enterosorbent Enterozoo in retail (Silma is widely known as the manufacturer of a similar drug for people, Enterosgel). Agrobioprom has a much wider product range, including anthelmintic Fenpraz (+32%) and sedative Vetspokoin (+22%). 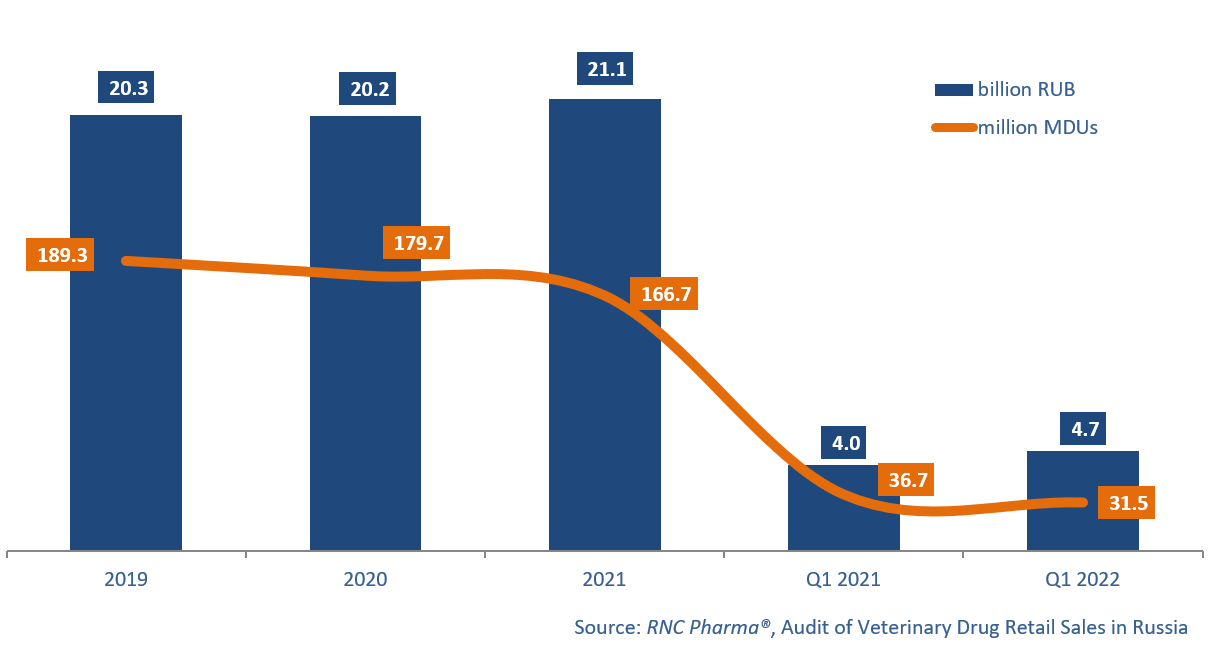