In Q1 2022, the online sales or reservations of pharmacy products (pharmaceutical drugs and parapharmaceuticals) in Russia were 78.4 billion rubles (end-user prices, VAT included), 69.6% up from Q1 2021 against 52.7% in 2021 / 2020. The online segment seems to be growing faster and faster, but last year the growth rate of the online were several times that of the offline. Now, however, the growth rate of the online only doubles that of the offline, with the sales in the traditional pharmaceutical retail channel having increased by 32.4%.

The pharmaceutical retail had to go through a rather difficult period because of the rush demand during a liquidity crisis in the market in March 2022. This could not but affect the activities of the online segment, but the online, to be fair, will very soon have no room for development unless the existing restrictions on the sale of prescription drugs are lifted. Besides, it is not only about losing a significant part of the revenue, but also about not being able to launch a full-fledged delivery system, since the process could only be profitable if the order starts at a certain sum, but when the online product range is being artificially limited, the growth of the average check is also limited.

However, the share of the e-com segment in the total volume of the Russian pharmaceutical retail, including parapharmaceuticals, continued to grow, reaching 16.2% in Q1 2022. The total revenue of the top 20 companies for the period was 67.4 billion rubles (end-user prices, VAT included), with the top companies accounting for 86% of the total volume of operations in the online segment. At the same time, we can see some concentration trends, since the share of the top companies increased by 0.5%. The scale of the business can undoubtedly lead to more development opportunities, especially when the market is going through a liquidity crisis. This situation is sure to get worse later this year.

The top three companies remained the same. Apteka.ru still tops the ranking; as of April 1, 2022, the company worked with around 24,100 pharmacies, and its market share is more than three times that of the next two companies. However, the growth rates of its sales are noticeably lower than the average growth rates in the industry, in particular, several times lower than those of its main competitors. Nevertheless, given the impressive gap, the company’s top position is hardly in danger for the next few years. Zdravcity, Apteka.ru’s closest competitor in terms of business model, came 4th. While it cooperates with fewer pharmacies than Apteka.ru—20,200, it has one of the best growth rates—its revenue grew 2.6 times against Q1 2021. Rigla has the highest sales growth—its sales increased 2.7 times. Samara’s Vita and Eapteka, which returned to its initial name, grew at a comparable pace—2.6 and 2.3 times, respectively.

Implozia was the only top-20 company with negative growth rates (–6%). ASNA also fell into the danger zone with 5%, which is 14 times smaller than the average growth rate in the segment. 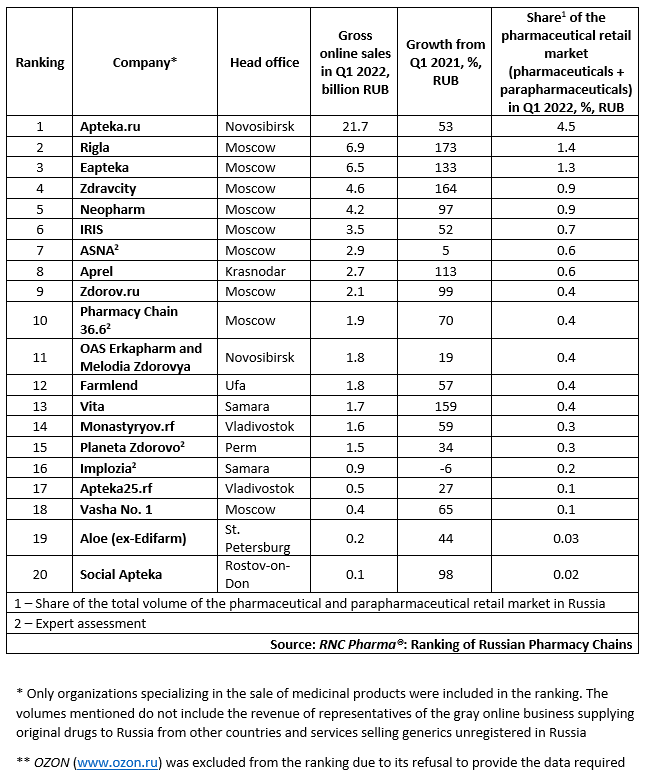