From January to April 2022, Russian manufacturers produced 258.8 billion rubles’ worth of pharmaceutical drugs (manufacturer’s prices, VAT included), up 29.3% from the same period in 2021. In physical terms, the production volume was 1.47 billion packages, up 3.5% from the year before. However, if calculated in minimum dosage units (MDU), the production volume was 26.9 billion, up only 1.3%.

The rush demand and the sharp increase in production in March were naturally followed by a recession in April. The growth rate in April against March was –4.5% in rubles and –14.7% in packages, which is actually a standard spring trend. The growth rate against April 2021 was as high as 35.9% in rubles and 9.5% in packages, though. In MDUs, however, it was –1.8%, but that is completely normal. Despite the issues with the supply of raw materials and components, the Russian pharmaceutical industry has so far been able to avoid any major difficulties since the start of the crisis. There have not been any obvious anti-crisis strategies yet; the manufacturers have not increased the number of single doses in a package in order to save packaging materials, etc. Besides, compared to 2021, the manufacturers seem to be doing quite the opposite—decreasing the number of doses in packages, especially in OTC categories.

These change led to noticeable differences in the growth rates by product groups. In January–April 2022, the production of OTC drug went up by 11.6% in packages from the same period in 2021. As for the Rx category, the growth rate was negative, –5%. However, if calculated in MDUs, the situation is reversed: –2% for OTC and +4.3% for prescription drugs.

Usolpharm had an all-time high growth rate in January-April 2022 among the top 20 manufacturers of OTC drugs. The company’s manufacture increased 23.2 times from January-April 2021, with Corvalol, Salicylic Ointment, and Balsamic Liniment Wishnevsky contributing to the growth rates the most. Usolpharm is followed by Vifiteh (manufacture grew 6.6 times); its Mucaltin helped contribute to the growth rates, accounting for around 38% of the total production volume. Uralbiofarm rounds up the top three, having increasing its manufacture 2.9 times from 2021. Citramon and Acetylsalicylic Acid contributed to the company’s growth rates the most.

Production in Russia, including production of pharmaceuticals of foreign companies on owned or contract plants, in physical (packages) and monetary terms (RUB, VAT included) (January 2021–April 2022) 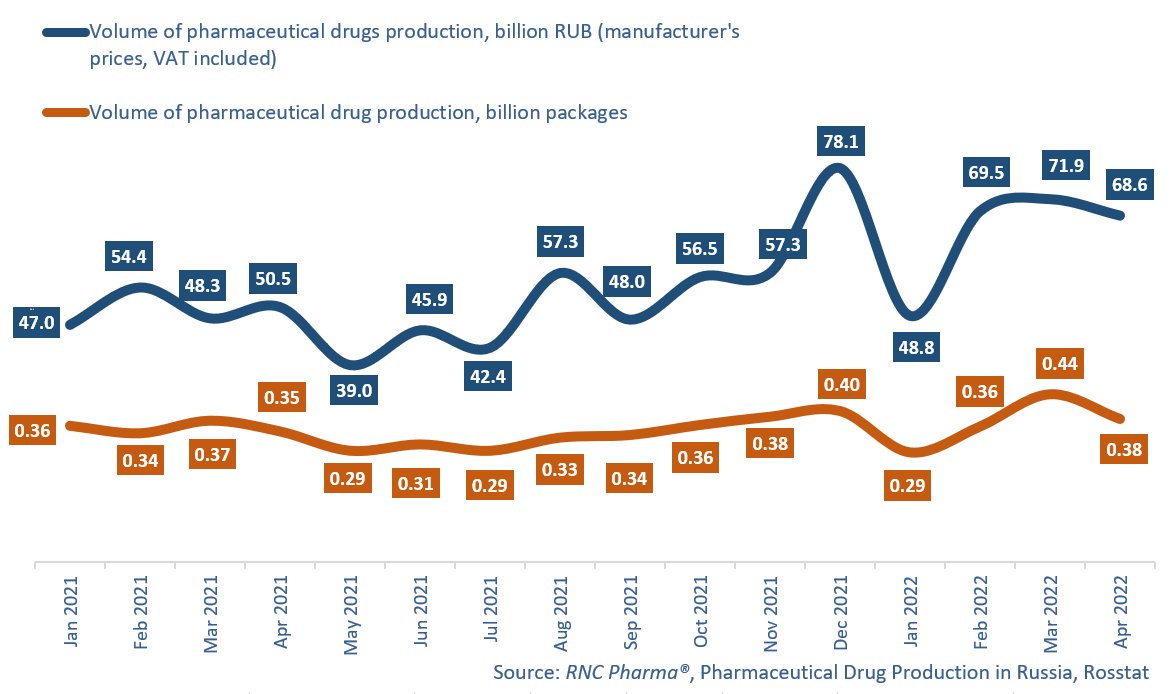