Between January and February 2020, Russia imported 2.46 bln RUB worth of veterinary drugs (customs clearance prices), which is monetary terms (rubles) 37% lower than that of the same period in 2019. The import volume of feed supplements amounted to 4.35 bln RUB, with the dynamics of -20%. As for veterinary APIs, the import volume is 306 mln RUB, and the dynamics are -14%.

Despite the negative dynamics overall, the top 15 companies with the largest import volume of veterinary drugs include several companies that have increased their imports. Dox-al (Italy) and Syva Laboratorios (Spain) have the highest dynamics, their imports grown by 4 times in monetary terms. Dox-al imported three veterinary drugs to Russia: antibiotics for farm animals Amoxiprom, Doximix, and Noxigard, and Syva imported mostly antibacterials, with Amoxoil having the highest dynamics (imports grown by 51 times).

Henan Kangtai Pharmaceutical (China) has the highest dynamics of the veterinary API import. The company did not import to Russia in 2019, but this year it imported Norfloxacin Hydrochloride, which amounted to 23.2 mln RUB. Among those companies that imported to Russia in 2019, Sinopharm Weiqida Pharmaceutical (China) has the highest dynamics, imports grown by 3.8 times. The company imported antibacterials Amoxicillin Trihydrate and its combinations with Clavulanate Potassium. 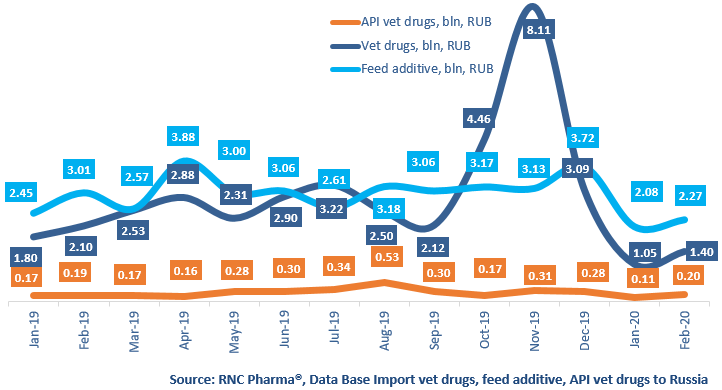