In 2021, the volume of the online sales or reservation of pharmacy products (pharmaceutical drugs and parapharmaceuticals) in Russia was 210 billion rubles (end-user prices, VAT included), 52.7% up from 2020, a record both for the online segment and the whole retail. The growth rates of the whole market were significantly lower, 5.9%. A noticeable increase in the consumption of prescription drugs almost single-handedly saved the growth rates from becoming negative, since the sales of OTC drugs stagnated, and the offline sales of parapharmaceutical products, albeit positive, were significantly lower than the inflation rate.

The e-commerce segment accounted for 13.4% of the Russian pharmaceutical market in 2021, with the top 20 companies providing 179.5 billion rubles (end-user prices, VAT included) in revenue—nearly 85.5% of the online segment. Q2 2021 recorded the highest growth rates of 79% in monetary terms, which could be easily explained by the relatively low figures in the comparison period (the first wave of the pandemic). But the results of Q3 and Q4 2021 were also outstanding in terms of growth rates (+62%). The active development of the online segment with the help of representatives of the larger pharmaceutical retail contributed to the growth rates. It seems that those representatives realized that if it is impossible to stop revolutionary changes in the market, they need to influence these changes, rushing to invest in the e-com segment.

The share of the leader in the pharmaceutical e-com segment, Apteka.ru, was 3.8% of the total volume of the Russian pharmaceutical retail in 2021, or 28.2% of the online segment. While the growth rates of the company’s sales were very moderate, 18%, the number of pharmacies the company cooperates with broke new records. As of January 1, 2022, the organization was partners with 22,840 pharmacies, nearly 32% of the Russian retail (the total number of pharmacies operating in Russia is 71,850). In addition, the total number of the company’s pharmacies increased by 6,973 compared to January 1, 2021.

Apteka.ru is followed by Rigla, one of the leaders in terms of sales growth rates (the company’s revenue increased 3.1 times from 2020). However, Apteka.ru’s revenue was still 3.5 times that of Rigla, so the leader is unlikely to change soon. The three pharmacy chains with the highest growth rates were Aprel (revenue increased 6.5 times), Zdravcity (5.2 times), and Vasha No. 1 (3.9 times). These companies are represented by players of various formats and scales, but they are all actively increasing the number of partners. Protek has been developing the fastest, Zdravcity almost caught up with Apteka.ru in terms of the number of pharmacies (19,570, as of January 1, 2022). Aprel is also one of the faster expanding companies—in Q4 2021, it crossed an important milestone of 3,000 pharmacies (+1,258). While the results of Vasha No. 1 might seem more modest—as of January 1, 2022, the organization had 70 partners (+6) —the company entered the market in St. Petersburg at the end of last year. 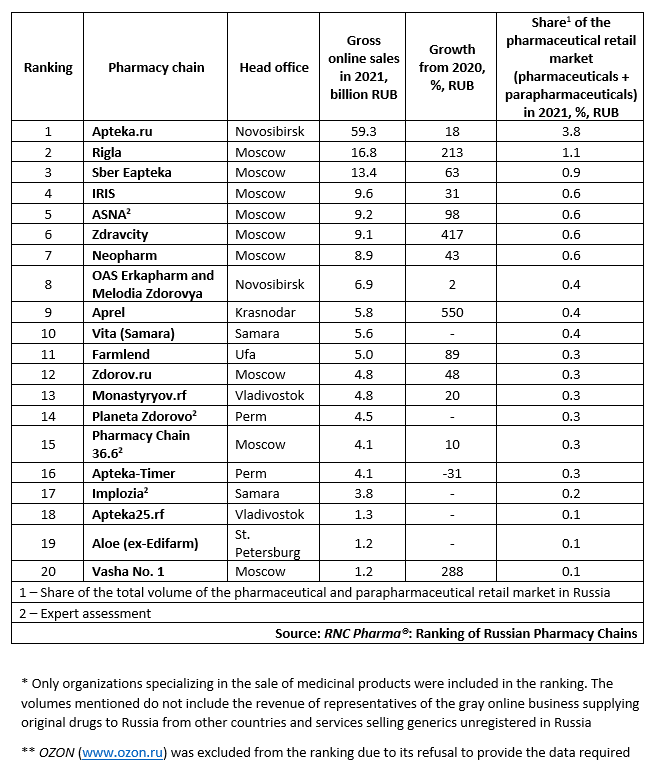