The negative dynamics in monetary terms can be explained by the new import line (201 INNs in January 2018 against 225 in January 2017) and the fall in prices. The prices for 71 INNs have fallen, and the prices for 48 of them have fallen by more than 10%. In a number of cases, the import of less expensive alternatives has risen, and the average price for those APIs has fallen as well. Certain companies changed their pricing policy, in particular, the price for Tamsulosinum (Astellas) has dropped by nearly 60%, while the price for Insulin soluble [human biosynthetic] (Sanofi) has fallen by 21%.

For the first time since January 2010, Russia has started importing Benzyldimethyl-myristoilamin-propylammonium (Miramistin) and pharmacopoeial Methylii salicylas. 4 kg of the first one was imported to Russia by Bofarm, which was hardly beneficial to Infamed. AT the end of December 2017, Tula Pharm registered an alternative to Miramistin – Septomyrin. The company Biokhimik imported 25 kg of Methylii salicylas. Their only registered drug that contains Methylii salicylas is Bom-Benge. Since 2010, Bom-Benge has been produced in Russia by only three companies – Samaramedprom, Tula Pharm, and MosFarma (in 2011). 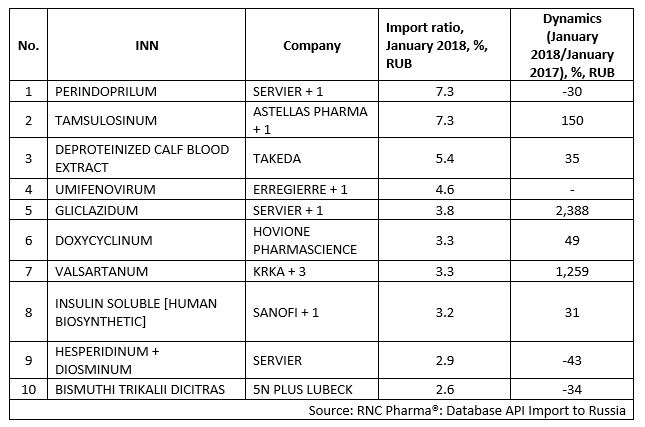