Between January and February 2020, Russia imported 27 bln RUB worth of ready-made pharmaceuticals (customs clearance prices), which is in monetary terms (rubles) 65% lower than that of the same period in 2019. The import volume of the first two months of 2020 turned out to be lower than that of any January, when the activity of the importers is usually the lowest. The dynamics of the in-bulk import in monetary terms are +28%, with the volume of 22.5 bln RUB.

The import of ready-made drugs in physical terms amounts to 69.4 mln units, which is 73% lower than that in 2019. If calculated in minimum dosage units (MDU), the dynamics are -68%, with 1.56 bln MDUs. The Russian importers have been using the stocks made in October-November 2019 preparing for the introduction of the drug labeling system, which was then postponed to July 2020, and given the situation with the coronavirus, could theoretically be postponed to a later date. Despite the high dynamics in monetary terms, the in-bulk import in physical terms has also fallen, with -44% (281 mln MDUs). The low dynamics here could be explained by changes in the import line.

Among the top 15 importers of ready-made drugs with the largest import volume in monetary terms, Bosnalijek has the highest dynamics (imports grown by 9.1 times). Lysobact, which was not imported at all between January and February 2019, contributed to the dynamics the most. Bayer Healthcare has the lowest dynamics (-85%), having imported only 645 mln RUB worth of pharmaceuticals this year against 4.4 bln last year.

As for the top 15 importers of in-bulk drugs, Abbvie has the highest dynamics, with the imports grown by 146 times. Between January and February 2020, the company was importing four products to Russia, with anti-tumor Venclexta and immunosuppressant Humira, which were not imported in 2019, accounting for the largest volumes. AstraZeneca has the lowest dynamics of -53%. The import dynamics of four of the seven products that the company was importing to Russia between January and February 2020 are negative, with Betaloc having the lowest dynamics (-88%).

Dynamics of import of pharmaceuticals to Russia (except from the EEU countries), free circulation prices including customs clearance and VAT, RUB (January 2019 – February 2020) 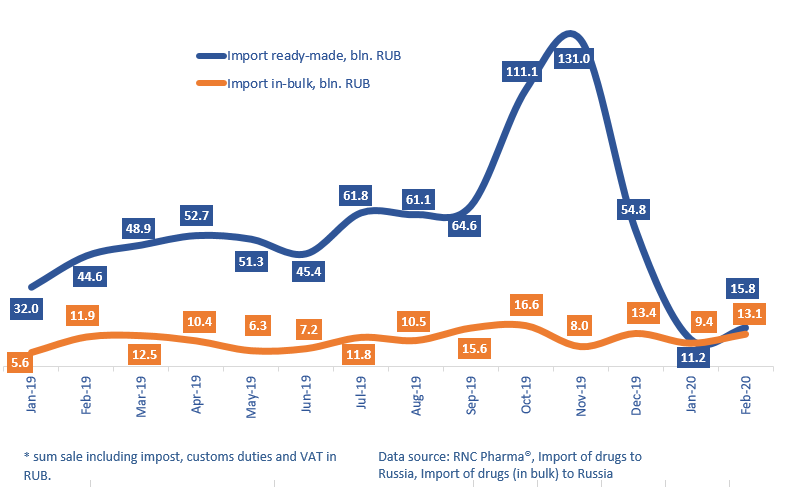