Veterinary Vaccine Import to Russia in 2021


In 2021, Russia imported RUB 15.0 billion worth of veterinary vaccines (imports from the EEU countries excluded; prices include the customs clearance), up only 0.5% in monetary terms (rubles). Obviously, the growth rates in physical terms were negative, given the high inflation rate in the veterinary market in 2021. The total import volume was around 6.1 million packages, down 5.1%. If calculated in dosages, the growth rate was –20.5%, with 18.1 billion imported.

Notably, the growth rates are negative for the second year in a row. However, in 2020 it was due to overstocking, and the importers used up their stocks during the year, but now the actual import volume fell to that of 2015–2016, when it did not exceed 17.7 billion dosages.

The volume and growth rates depended on the type of animal the vaccine was intended for. Vaccines for livestock account for 89% of the import volume and nearly 99.9% of the total number of imported dosages. The growth rate for livestock vaccines was only 0.2% in monetary terms, while that for pet vaccines was 3.3%. If calculated in dosages, however, the growth rates are negative for both groups: –20.5% и –16.4% for livestock and pets, respectively. Two vaccines from MSD topped the ranking for brand names with the highest import volume in 2021. They are the Nobilis line products, with the vaccines for infectious bronchitis of chickens, Nobilis® IB Ma5 and Nobilis® IB 4/91, accounting for the largest volume, as well as Porcilis, especially the vaccines for the prevention of porcine reproductive and respiratory syndrome. While the volume of the Nobilis vaccines fell by 8% in monetary terms, that of Porcilis rose by as much as 25%.

Ingelvac by Boehringer Ingelheim had the best growth rates among the top 20 vaccines; the import volume grew 27 times from 2020. The import of Ingelvac Circoflex, used for the prevention of circovirus infection in pigs, contributed to the growth rates the most. The vaccine for parvovirus infection, erysipelas and leptospirosis in pigs FarrowSure by Zoetis also had significant growth rates (the imports grew 4.8 times in monetary terms). As for vaccines for the prevention of infectious diseases in pets, only the Nobivac vaccines by MSD are among the 20 vaccines with the highest import volume in monetary terms; their import increased by 35%. Nobivac RABIES, a vaccine for animal rabies, was the most imported vaccine in the line. Nobivac is followed by Eurican, but the import of the latter decreased by almost 64%, ultimately kicking it from the top 20. 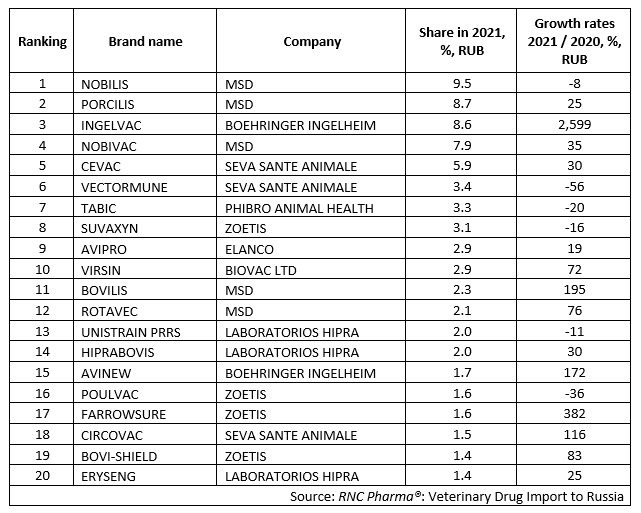